This Suv paved the way for Modern CUVs’ Domination of the Indian Automobile Market.

In the second edition of ‘Automobiles That Drove India, I will be talking about the car that has changed the face of the Indian Automobile Industry in the last Decade.

In the past few years, India has seen an unfathomable surge in sales of Pseudo SUVs’ or Crossovers. Now almost every car Brand that operates in India has at least one of these so-called SUVs’ in their portfolio which has kept their sales charts ticking, and for some brands such as Nissan and Tata, these automobiles have become a lifeline and saved them from an eminent failure.

These SUVs have garnered over a million sales in record time for their respective brands despite the Economic restraints caused due to Covid-19, buyers were rushing to get home one of these cars.

Even before the wretched pandemic and global chip shortages, cars like Suzuki Brezza, Hyundai Creta and others alike were demanding waiting periods of months and customers were willing to wait as well.

Something changed drastically among Indian consumers, these very people were once proud owners of cars like Honda City, Hyundai Sonata, Mitsubishi Lancer, Honda Accord and Skoda Octavia to name a few. Sedans and hatchbacks were the go-to body style from the mid-90s’ till the early teens.

Now, I don’t mean to imply that SUVs were non-existent during this time, there were a few SUVs roaming on the Indian roads but back then Indian preferred function over form. so, most of these SUVs were either seven-seater people carriers like TATA SUMO, Chevrolet Travera etc or true to its nature lifestyle vehicles like Thar, Gypsy etc and workhorses like Mahindra Bolero and Scorpio were around as well and almost became a cult among some buyers. And, then there were big true-blooded SUVs like Ford Endeavour, Mitsubishi Pajero and Toyota Fortuner. So, SUVs were not a new thing for India, but what was about to happen in 2013 can only be described as a phenomenon that was about to change the face of the Indian Automobile industry.

So, what made people shift towards Pseudo SUVs? and The Role played by Ford 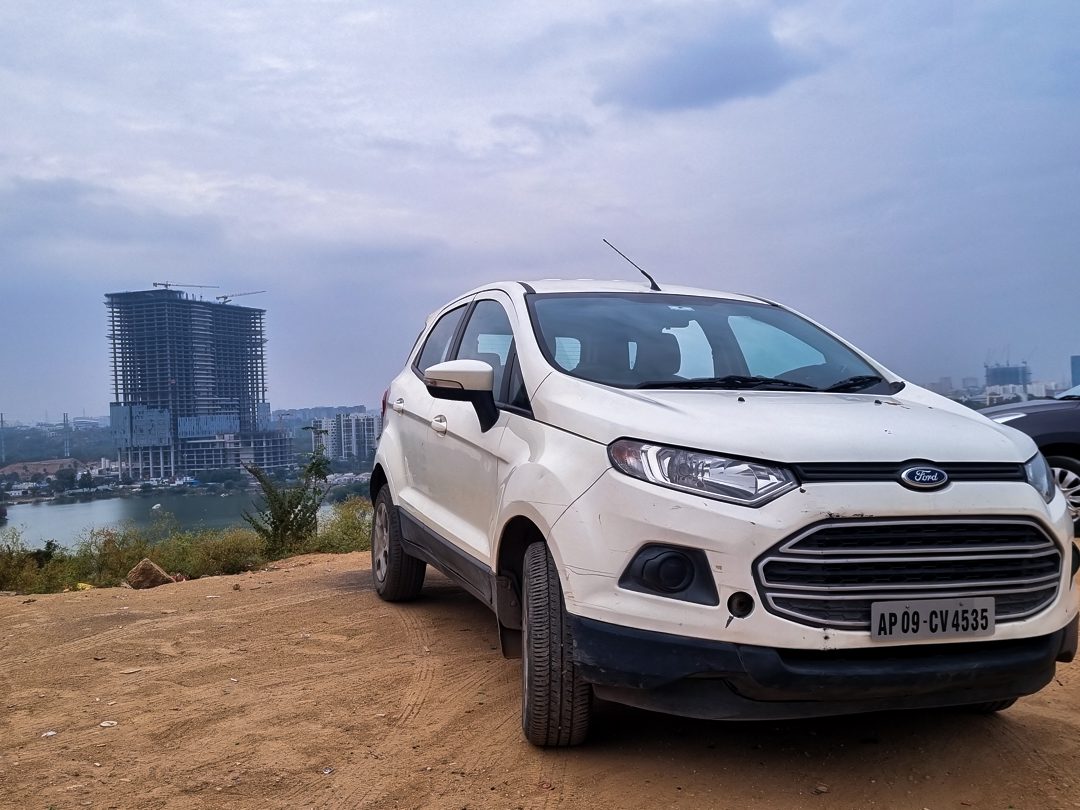 SUV Phenomenon around the globe was already taking shape, and buyers around the world were vigorously shifting towards Crossovers and small SUVs – for reasons beyond me – but India was yet to experience this spectacle and when it did – it completely changed the landscape of the Indian Automobile scene.

On January 4th of 2012, Ford unveiled EcoSport’s Concept at Delhi Auto Expo to the world, and on June 26th, 2013 Ford launched this SUV for the Indian market – surely Ford India executives were hoping for wonders from the EcoSports – but little did they know the monster they had unveiled to the naive Indians.

Now, by no means Ford’s EcoSport is the first compact SUV in the Indian market, before EcoSports – Renault had already launched their budget-Friendly Duster which was a perfect allrounder – that was received very well by journalists and consumers alike.

But, when EcoSports was launched a year later it took the limelight away from the Renault Duster. With a starting price of under 6.0 lac Rupees, EcoSport was a sure hit and introduced Indians to the world of new possibilities at the same price as their existing hatchback or sedans.

By 2015 Ford managed to sell over 200,000 – EcoSports around the globe – and it kept a respectable and steady sales figure in the Indian market as well. Ford manufactured EcoSports in India and exported them- to several countries including south and north America. But all that was about to come to an abrupt End – on the 9th of Sept, 2021- Ford announced their exit from India – and it will be closing its two manufacturing facilities indefinitely in India – also bringing a halt to its export programs. 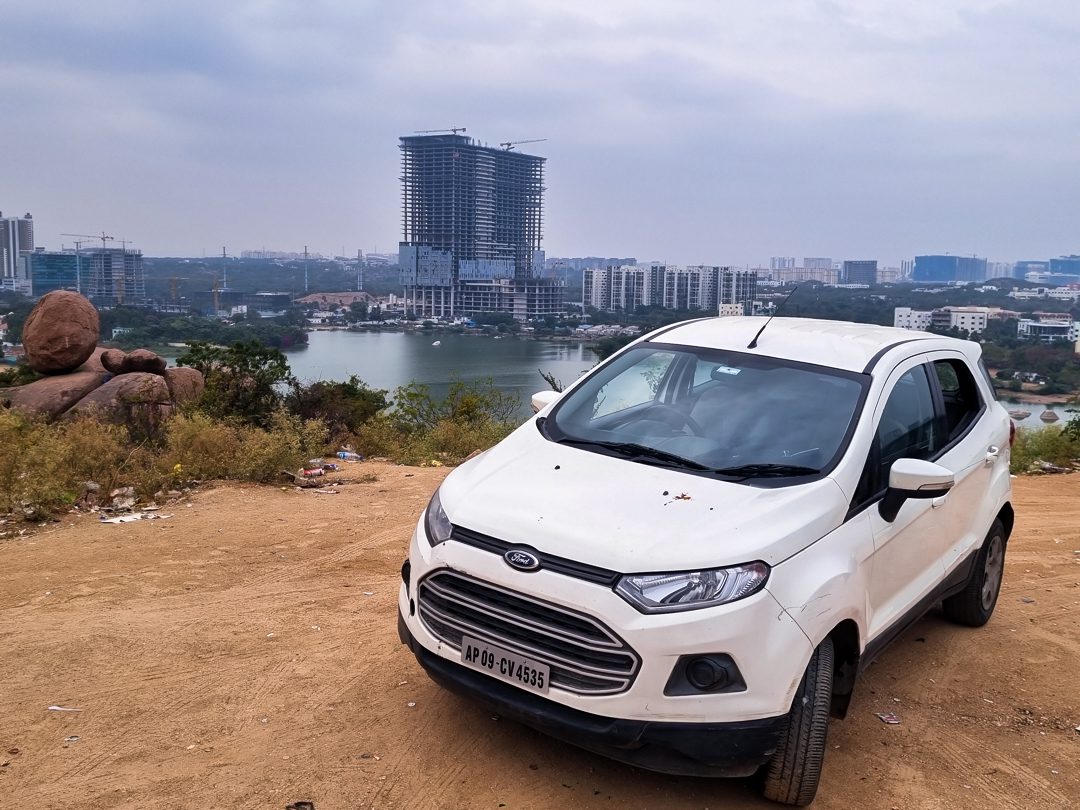 Leaving myriad of its fans and existing owners dejected. The reasons for exiting India were plenty- but the biggest of them all was – a company that started the compact-SUV trend in the country was struggling to sell its models – despite being very well placed in the market – boasting a very impressive brochure it struggled to find demand and reasoning to launch new models amidst the ever-dwindling sales and unsustainability of their both manufacturing plants.

This is how India’s Torchbearer for the Compact- Sports Utility-Vehicle is to drive.

For the Indian, Market Ford offered 6 trim levels and 2 engine options for the EcoSports – one petrol 1.5-liter Ti-VCT and a diesel 1.5-litre TDCi – Producing around 120 hp and 100 hp respectively.

Let me clear something up – before proceeding with my review- I used to despise The diesel motor for their lack of refinement and the smell earlier diesel used to emit. Only a few cars are exceptions – that I think to work better in that diesel guise – such as the ritz diesel and Hyundai Verna 1.6 CRDi to name a few.

So, when I got into the EcoSports knowing it was a diesel model, I didn’t know what to expect- especially after finding out it only produces 90 hp and 205 Nm. And when I got on with it moving in the city traffic I was very frustrated and unimpressed to an extent by now I was driven a few diesel cars that were very comfortable in higher gears – rarely complained to downshift to get a move on. 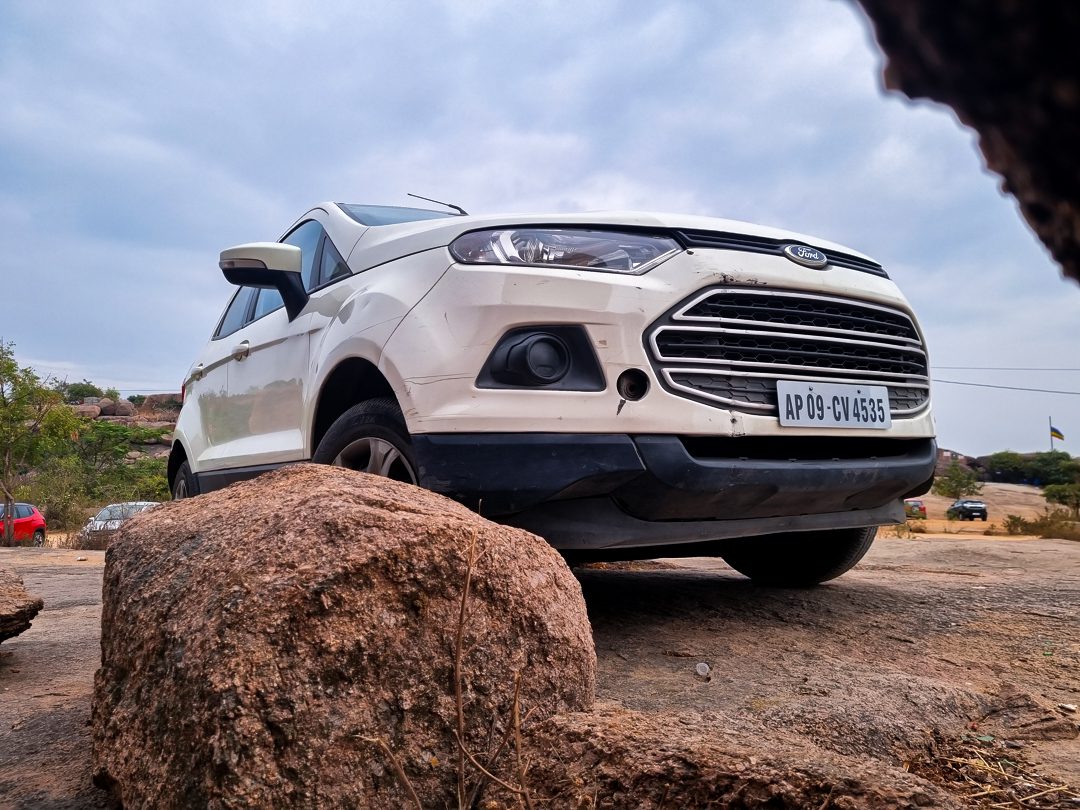 So, I kept using the same technique in the EcoSports I stayed in higher gears even in the traffic hoping that its 205 Nm of torque at 1500rpm would handle the situation effortlessly. But the engine didn’t respond well to that technique and always felt a need to downshift to keep the engine happy.

Then, after a few kilometres of driving with a bad technique, I decided to change my technique- which is very similar to driving a petrol motor. Keep it in the lower gear for as long as possible and upshift at the medium to high RPMs.

I’ve noticed a complete change in the character of the car – it almost felt like it transformed from a sluggish big bulk overgrown hatchback to a very responsive and effortless sedan-like pace. I realized that the best way to drive EcoSport is to upshift after 2000 rpm to extract the best performance and refinement from the motor.

I presumed the fuel economy would have dropped considerably after the way I was operating the engine – but to my surprise, I was getting around 14kmpl in the city with that sort of driving – that I found to be a bit rash. 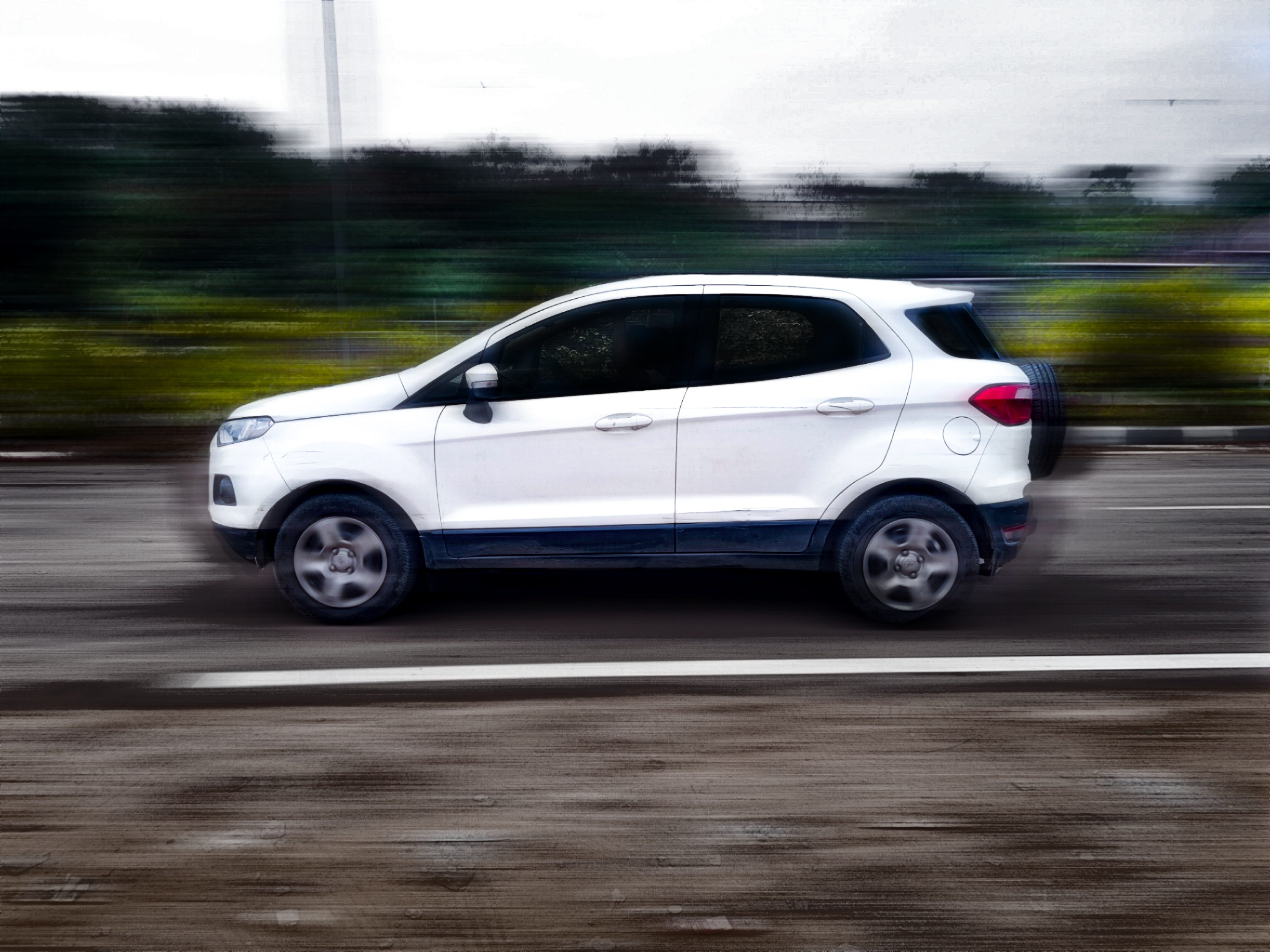 After spending some time in the city traffic I made my way towards the expressway where I got to open the full taps of the engine- in no time I found myself reaching high triple digits speed with very little exertion – it still had more to offer and a gear left to go.

At speeds over 150kph engine felt relaxed and the cabin noise was well-filtered, Car felt stable and steady even while changing lanes at those speeds. But my only gripe would be its electronic steering that failed to weigh up at high speeds – and failed to insert confidence. At times I found it to be hyperactive which was quite unnerving.

The electronic power steering makes manoeuvring this 4-meter car trouble-free – and guises its size considerably even in tight spaces.

Even for its lack of confidence at triple digits, I have to admit the EPAS system in the EcoSport is the best I have used so far – it communicates well, is very precise, especially at high cornering speed, and does give a decent commentary of what the front wheels are up to.

Now, one would ask why would anyone care about CUV handling characteristics but let me clarify this EcoSport being built on Ford Fiesta’s platform does have very good driving manners – but what surprises me and anyone who would disregard its dynamic capabilities based on its size and sort of repugnant segment it belongs to – actually inspires you to push the limits while cornering up until the front tires start to lose some grip which mind you happens only when you decide to enter a fast-corner with speeds over 120kph. 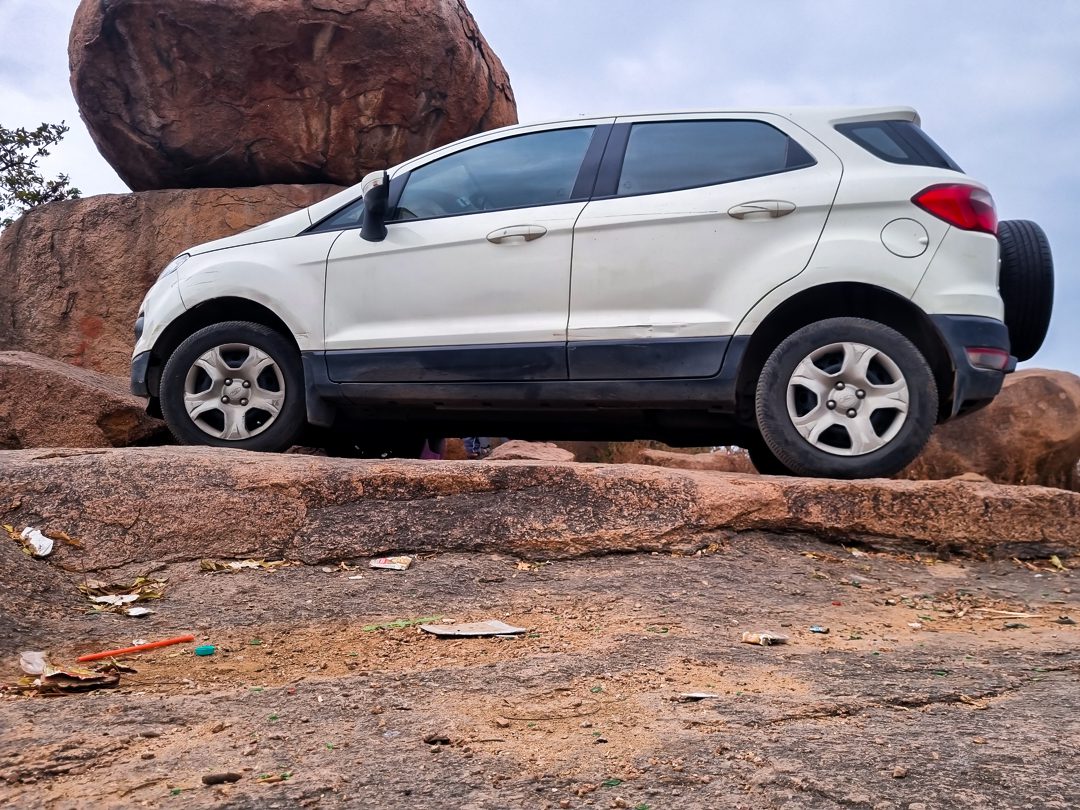 Having a great dynamic doesn’t take away much from EcoSports ride quality although it does reside on the stiffer side, it still glances over bad roads well without troubling the passengers.

No wonder EcoSports had to be the one that got people into compact SUVs, many Brands followed suit and got us cars like Creta, Seltos, Brezza, and Nexon, and many more that have struck a decent balance between practicality and performance.

Surely this doesn’t imply that CUVs wouldnt have happened if not for Ford and EcoSport. But it was and is by far the most complete CUV sold – it had driving dynamics and rides very similar to a sedan, and tackles potholes like a big bulky SUV.

Many modern CUVs present in the market had to sacrifice something or the other to attain one specific characteristic, Rarely do we get to drive cars that make us content while driving them – and in my humble opinion, EcoSport is one such car. which no longer exists because it failed to shine through the oversaturated market of CUVs.